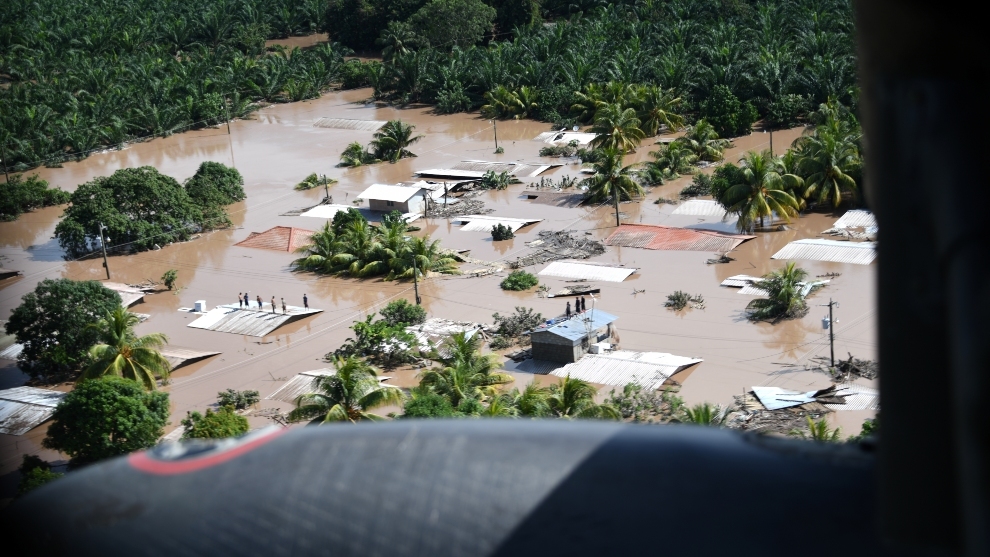 Donate now and show your solidarity with Honduran and Guatemalan Farmworkers devasted by the impact of Hurricane Eta.

In Honduras, workers from the Banana sector and on Palm Oil plantations had their homes flooded and were stranded surrounded by water. Workers and union organizers had to be rescued from rooftops by boat and helicopter including from our partner union El Sindicato de Trabajadores de la Agroindustria y Similares (STAS). In Guatemala, the storm flooded whole communities as well as all of the banana farms and villages where the members of our partner union Izabal Banana Workers’ Union, (SITABRI) live and work. Hundreds of union members and their families spent days on the roofs of their houses and have lost everything they owned.

These are the same fighting unions that over the past decade have led powerful union and migrant rights workers organizing in Honduras and Guatemala and are critical to defending labor rights and building worker power going forward. With fields flooded and other damage, it will take months for work to normalize, especially export fruit packaging. Meanwhile, communities lack food, housing, stoves, clothing and other basic needs. Our union partners, while working to recover themselves and support their own families, are bravely stepping up and literally traversing rivers to reach their members and provide relief.

In crisis and rebuilding, worker organizations are critical. Our partner unions support communities’ immediate needs, advocate for equity and justice in the rebuilding, and make sure big corporations don’t use the disaster to drive deeper worker exploitation.

Donate now and show your solidarity. 100% of your donation will go directly to Hondurans and Guatemalans affected by the hurricane to help them with their basic needs, including purchasing food, stoves, mattresses, clothing, and home repairs.

Together we can support the efforts of the brave trade unionists to aid, defend, and strengthen workers and their communities.