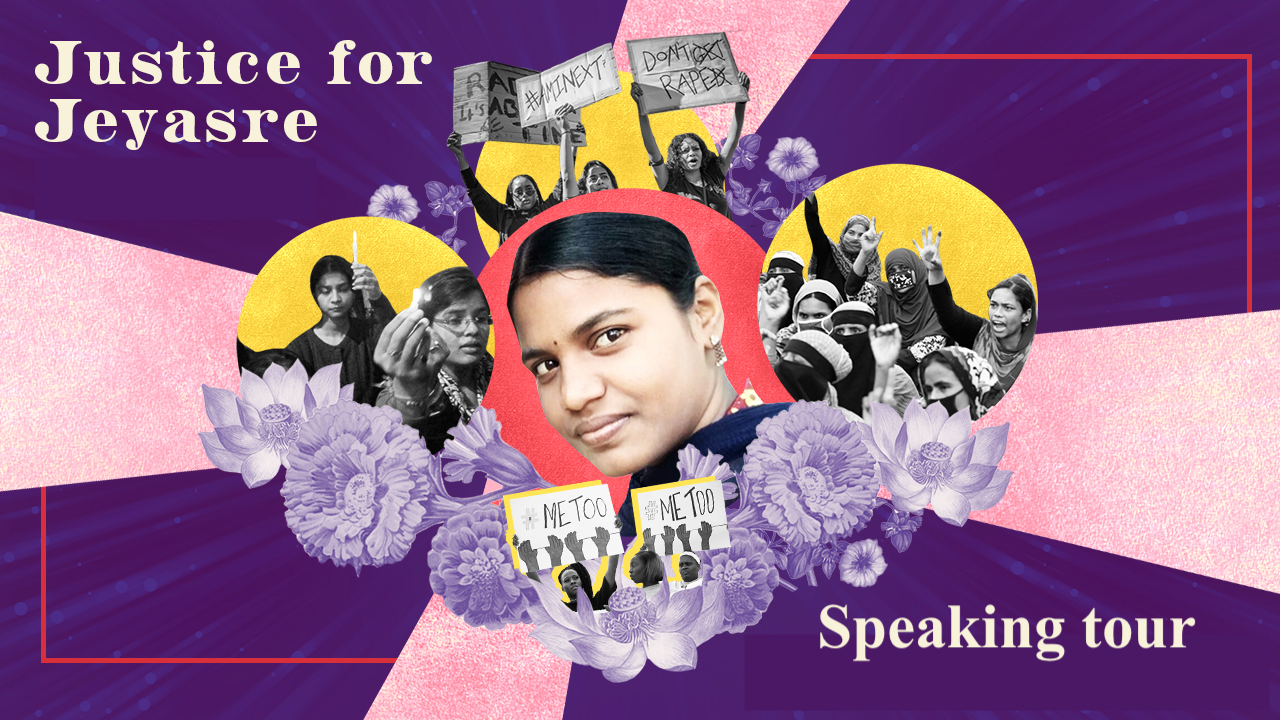 The Justice for Jeyasre Speaking Tour Stops in Los Angeles

In Los Angeles, garment workers like Maria, Elizabeth, and Carlos are earning around $6 an hour. That’s because they’re paid through the piece rate system, where workers earn pennies per garment sewn instead of earning an hourly wage. “These industries are run by millionaires,” Maria from the Garment Workers Center shared on the Los Angeles Justice for Jeyasre Speaking Tour stop, “and they have us enslaved.”

A new law in California, the Garment Workers Protection Act, will end this practice by making major fashion brands responsible for paying garment workers minimum wage. Previously, when workers filed wage theft claims, the suppliers and factories would be responsible for the wages. But, they didn’t have the money to pay back the workers, so they’d often just close or use other tricks to avoid financial responsibility. This bill will make the people at the top of the supply chain, the brands, responsible for wage theft claims.

The Justice for Jeyasre campaign is also fighting to hold brands accountable for working conditions at their factories. At the Los Angeles Speaking Tour stop, both campaigns used the opportunity to share their strategies with one another and join forces. With nearly 60 people in attendance at the speaking tour’s Los Angeles stop, workers and organizers generously shared their power analysis and stories from their campaigns. Members from the Garment Workers Center, the Western States Regional Joint Board (WSRJB) of Workers United, Remake, Fashion Revolution USA, Workers United 75, Bet Tzedek Legal Services, Warehouse Worker Resource Center, and United Students Against Sweatshops spoke about protesting, advocating at the state capitol, and building coalitions to support the bill.

After years of struggling to get workers their owed wages, these groups focused on brand accountability and won.

The Justice for Jeyasre campaign is also fighting to hold brands accountable, but through a set of enforceable and binding agreements between brands, their supplier, and the TTCU. These would include monitoring, remediation, and prevention of gender-based violence and harassment as well as protecting workers’ freedom of association. We know, from Jeyasre’s story, that suppliers create coercive workplaces, rife with sexual harassment and violence to push workers into producing extremely high volumes of clothing at very low wages, and to block them from unionizing. This allows fashion brands to make huge profits. The Justice for Jeyasre campaign puts the responsibility back on brands, who ultimately profit from the low cost and high production of workers in their suppliers’ factories, to end these practices.

Garment workers in California and India work and organize in different contexts, and therefore build different strategies to win justice. But, when workers and organizers connect those strategies and build global solidarity our campaigns become even stronger.

As Maria Rivera, the Regional Manager from WSRJB said, “Your fight is our fight. We’re always fighting against these gigantic corporations. We have the strength and we have the heart.”