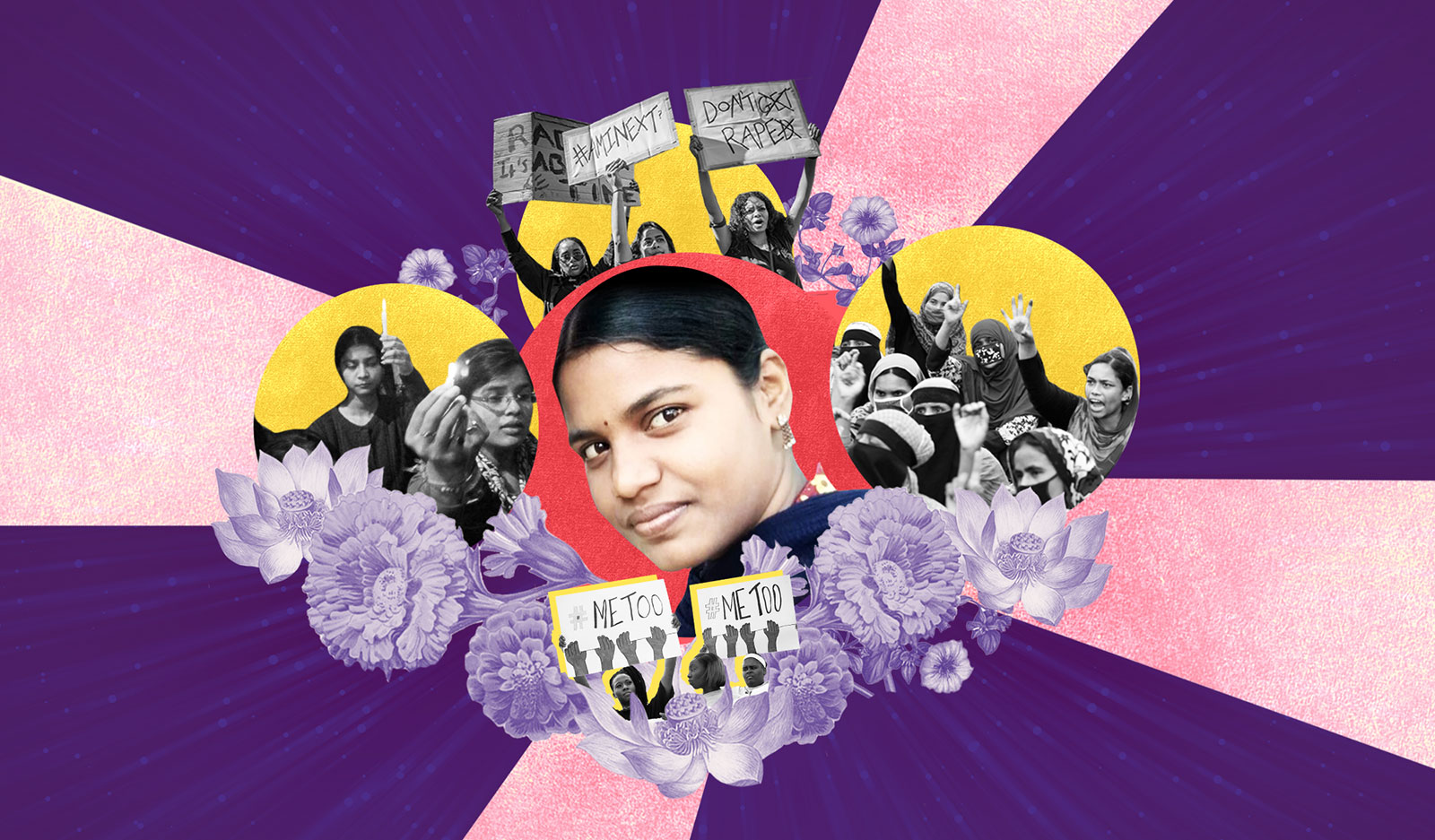 On April 21st, over a 1000 people from 33 countries gathered in solidarity with the family of Jeyasre Kathiravel and her union, the Tamil Nadu Textile and Common Labour Union (TTCU). Earlier in the day, Indonesian unions and womens’ rights organizations held an in-person vigil in solidarity as well. Jeyasre, a 21-year-old Dalit woman, student and union member was murdered in January 2021 by her supervisor at the garment factory Natchi Apparels, in the Indian state of Tamil Nadu. Before her death, Jeyasre had faced months of sexual harassment and intimidation on the factory floor at Natchi from her supervisor. Natchi Apparels is owned and operated by Eastman Exports, one of India’s largest garment manufacturers.

Since Jeyasre’s death, over 25 of her co-workers have come forward publicly to the Guardian (UK) to attest to a culture of gender-based violence and harassment (GBVH) at Natchi. At the vigil, several TTCU members sang two mourning songs in Jeyasre’s honor. “We miss you, our friend and our comrade,” they sang in Tamil. “We can’t accept your loss. Everywhere we look, we see your face … What happened to you must not happen to any woman. They say women are goddesses, but the evil that fell on you, you could not fight it off. How much we continue to live, missing your beautiful smile.”

Jeyasre’s mother remembered her daughter, who was the first in her family to go to college and who worked nights at Natchi Apparels to pay for her education. “As a mother, I don’t want this to happen to any daughter, any worker,” she said. “I lost a beautiful daughter I can no longer get back. I consider all the workers present in the textile sector [to be] my daughter, so the incident that happened to my daughter should never ever happen to any young workers.”

Thivya Rakini, the state president of TTCU, presented a transformative vision to end GBVH at Natchi Apparels in Jeyasre’s honor. “We strongly believe that ending GBVH requires structural changes in garment supply chains that bring unions, suppliers and brands together,” she said. “This is why we are demanding an enforceable binding agreement to end GBVH, so that all parties including brands and suppliers are bound to work sincerely, with concrete goals, for better working conditions for women in the factory.”

Natchi Apparels supplies to H&M, though Eastman Exports is a major supplier to several major fashion multinationals. Global labor, women, and Dalit rights leaders extended solidarity to TTCU, Natchi Apparel workers, and Jeyasre’s family, pledging support in their fight for justice and affirming the credibility and importance of women workers who speak out against gender-based violence and harassment.

Mariam Dhawale, General Secretary of the All India Democratic Women’s Association (AIDWA), highlighted the need for freedom of association at Natchi Apparels. Noting that almost all workers at Natchi Apparels and other factories owned by Eastman Exports are women, she asked, “Why is it that 90% of the supervisors are men? Does Eastman Exports have an answer to that?”

Christian Nunes, President of the National Organization of Women in the United States, said, “We must reinvent workplace cultures that treat women as subservient and powerless … Jeyasre Kathiravel was part of this struggle to end gender-based violence and harassment in her workplace … we must continue to say her name.”

Beena Pallical, of the National Campaign on Dalit Human Rights in India, said, “We have lost Jeyasre — we can’t get Jeyasre back … at the end of the day we’ve lost a precious life. But we are with you, and we stand with you very strongly and we hope that all our demands are fulfilled, not just for Jeyasre’s case but other cases in these industries. … international brands, when they come here, they do not look at the local context … many jobs [in these industries] are offered to Dalits, especially Dalit women. Dalit women’s bodies are used [in these industries] as if they have no rights.”

From Indonesia, Elly Rosita Silaban, the President of the Confederation of All-Indonesian Trade Unions (KSBSI) and a member of Asia Floor Wage Alliance’s Womens’ Leadership Committee of women trade-union leaders in the garment industry, affirmed the need for enforceable agreements to end GBVH in garment production. She explained, “this violence is part of production processes in the factory and closely linked to the practices of brands, where male supervisors and managers have impunity to abuse women workers in order to exploit womens’ labor for greater margins and profits.”

Alvina Yeh, the Executive Director of the Asian Pacific American Labor Alliance, AFL-CIO (APALA), said, “I want Jeyasre’s family and fellow union members to know that we are grieving with you. … Jeyasre represented all that was bold and brave in the face of sexual harassment and economic inequity. What we learn from Jeyasre and her coworkers is that supplier-led training programs and grievance mechanisms are not enough. We need deep shifts in how much power we allow bosses and managers to have over employees and their bodies.”

In conjunction with the vigil, the International Dalit Solidarity Network (IDSN) and Asia Floor Wage Alliance have released a statement echoing the existing call from the National Campaign on Dalit Human Rights for an enforceable binding brand agreement to end systemic GBVH as a step to address the ways in which GBVH leverages caste discrimination.

During the vigil, Thivya, TTCU’s president, made it clear that TTCU, which is Dalit- and women-led, stood strong to demand an end to GBVH in the Tamil Nadu garment industry. She highlighted that since Jeyasre’s death,  even more women garment workers have joined the union, prepared to act against GBVH and demand violence-free workplaces. “In this struggle [against] GBVH, women workers should not be considered secondary actors or passive subjects, but as the primary actors who drive change in the industry.”

Libakiso Matlho, of the Women and Law in Southern African Research and Education Trust-Lesotho, spoke on behalf of union and women’s rights organizations in Lesotho who signed the first enforceable binding agreement to combat gender-based violence in garment manufacturing. She pledged solidarity to TTCU and to women workers at Natchi Apparels in their fight for an enforceable binding agreement on GBVH.

“All we are saying is that everyone has a right to live — has a right to live in a world where she is dignified. To live and work with freedom. … we shall not rest until garment workers’ rights are promoted and protected. … Because Jeyasre’s life matters.”

Jeyasre’s family expressed profound gratitude for the solidarity from individuals, unions and womens’ and Dalit rights organizations from around the world, both now and moving forward. Looking ahead, Thivya made TTCU’s demand clear: “The struggle for accountability from brands and suppliers to ensure decent working conditions for women workers in the factory is the way in which we should continuously honor Jeyasre’s life as well as other survivors of GBVH.”