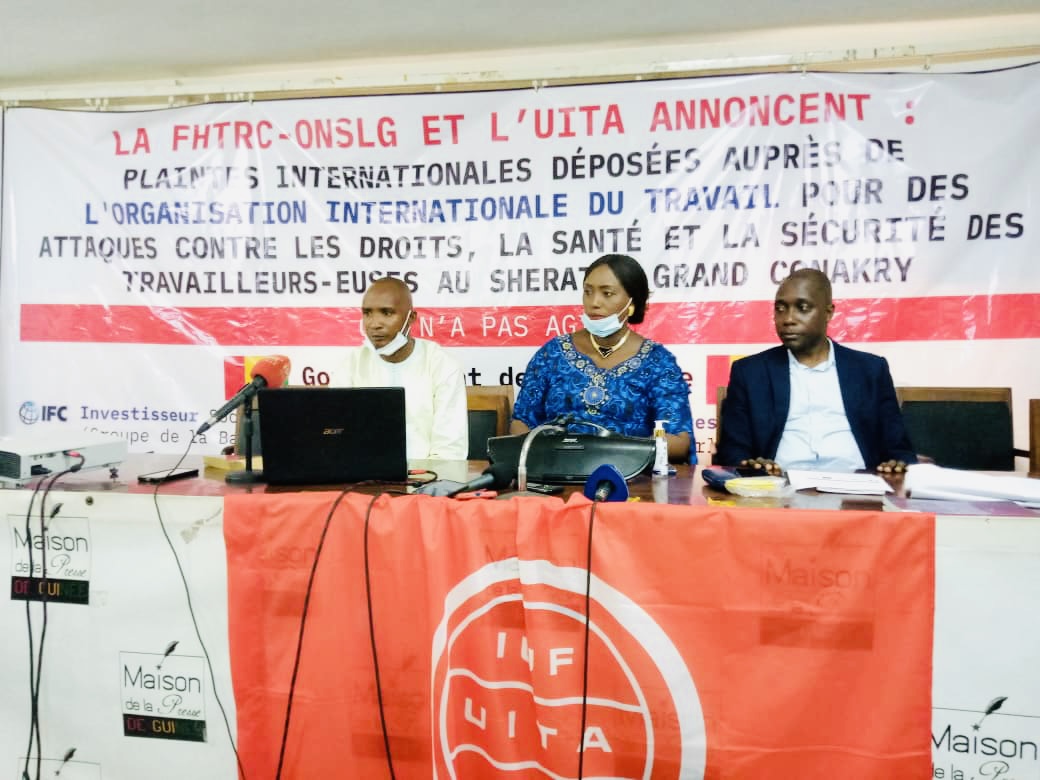 Today, Global Labor Justice-International Labor Rights Forum (GLJ-ILRF) participated in a press conference hosted by the The International Union of Food, Agricultural, Hotel, Restaurant, Catering, Tobacco and Allied Workers’ Associations (IUF) and its affiliate the Fédération de l’Hôtellerie du Tourisme Restauration Catering et Branches Connexes de l’Organisation Nationale des Syndicats Libres de Guinée (FHTRC-ONSLG), and joined by the International Trade Union Confederation (ITUC) and the International Lawyers Assisting Workers Network (ILAW) where they announced the filing of complaints against the government of Guinea for failing to protect the freedom of association and occupational health and safety of workers at the Sheraton Grand Conakry.

The submission to the Committee on the Freedom of Association calls on the government of Guinea to “ensure the breach is remedied including reinstatement for the Union Office Bearers after their discriminatory terminations” and  to “highlight the importance of freedom of association and collective bargaining for all workers including on development-financed projects.” The Article 24 representation also asks the ILO to establish an ad-hoc tripartite committee to advise on how to bring the Government of Guinea into compliance with International Labor Standards on labor inspections and health and safety.

“We call on the ILO to make sure the government of Guinea protects the fundamental right to freedom of association for these Marriott-Sheraton workers in Conakry,“ said GLJ-ILRF Executive Director Jennifer (JJ) Rosenbaum. “Their struggle to negotiate with Marriott-Sheraton and the Topaz Group continues since March 2019.  International Law is clear— the General Secretary and Deputy General Secretary must be reinstated. Justice delayed is justice denied.”

IUF General Secretary Sue Longley told the journalists gathered in Conakry: “The global labor movement is coming together to back this struggle. The IUF, IUF Africa, our affiliate FHRTC-ONSLG, our affiliates in the HRCT sector, the ITUC, Global Labor Justice-ILRF, Solidarity Center and ILAW are here today to say with one voice that we will win. Our struggle here is just, and we will fight one day longer until our trade union brothers are reinstated and justice is served.”

“Laws are only as good as their implementation,” said Jeff Vogt, ILAW Network Chair. “We urge an ILO tripartite Commission to improve rule of law on labor inspection and workplace health and safety by the Government of Guinea so workers and unions are protected.”

Since 2018, the IUF, the ITUC, and GLJ-ILRF have urged the International Finance Corporation to enforce its own standards and actions consistent with responsible business practices as a development financier.  The International Finance Corporation, the Dutch Development Bank FMO, and other development investors must begin to take the role organized workers and trade unions play seriously, including making them an integral part of a dialogue with the IFC and its loan recipients and responding swiftly to address retaliation.