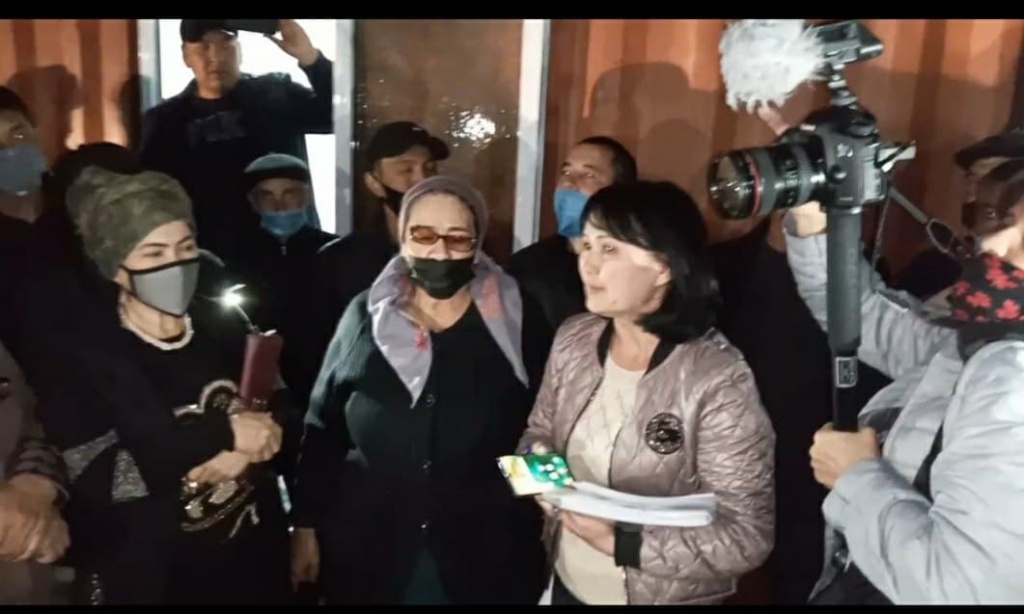 “The ability of this women-led union to survive and grow is a test for the Biden Administration’s willingness to make good on its commitment to prioritize labor rights and specifically freedom of association in its foreign policy,” said GLJ- ILRF’s Forced Labor Director Allison Gill. “The U.S. government, as well as the European Union, UK and other regional allies, must be proactive and swift to ensure noninterference as workers in Uzbekistan freely exercise their right to organize and to make this a priority for EU, UK, and other U.S. allies.”

Leaders of Odalat Sari Olg’a (Onward to Justice), the first independent labor union in Uzbekistan, reported receiving calls from officials at the local administration who did not identify themselves warning them that their involvement in union activities would cause them problems. Two leaders said that the Akaltyn district hokim [mayor] called them to warn them. Others said they received calls from local police officers demanding that they stop their organizing activities and leave the union.

“Workers have an internationally recognized right to form a union without intimidation or coercion from the government or from employers,” said Rudy Porter, Europe and Central Asia Director at the Solidarity Center. “The government of Uzbekistan and Indorama Agro should recognize Odalat Sari Olg’a and refrain from any interference.”

On March 19, 280 employees of Indorama Agro, a cotton textile cluster operating in Syrdarya region, held a founding meeting to establish the union and elect its leadership. Members elected Roza Agaydarova leader of the union and elected 11 deputies, each representing a subdistrict. Workers had long attempted to raise concerns about low wages, poor working conditions, and lack of social benefits, bringing complaints to the company, local authorities, and the media. Instead of meeting with them to discuss and resolve the complaints, some employees faced threats of dismissal and other consequences for making their complaints public. At the meeting, workers, many of them former farmers who had operated independent farms before the land was leased to Indorama Agro, spoke out about the challenges they face at Indorama. One farmworker said he had worked for two years without vacation or holiday leave. Others said they could not support their families on the low wages.

Odalat Sari Olg’a also encountered obstacles to holding their meeting. Workers had rented a meeting room to hold their election but when they arrived, the building administrator refused them entry, telling them the room was unavailable due to “urgent repairs.” Workers eventually found a meeting space at a local tea house, but the electricity was cut off soon after they began. They continued their meeting outside with workers holding up their cellphone flashlights to provide light.

“Uzbekistan has shown the political will to combat forced labor and open its economy but has fallen short on allowing independent civil society organizations to operate,” said Umida Niyazova, Executive Director of Uzbek Forum for Human Rights. “The way it treats the first independent trade union is a test of the seriousness of its reforms and the world is watching. The government should allow Odalat Sari Olg’a to register without delay.”

On March 23, Agaydarova said that she received a call from a regional representative of the Federation of Trade Unions of Uzbekistan, the national union federation, which is not considered independent from the government, and was told that according to the laws of Uzbekistan, they had to join the Federation, otherwise their union is invalid. Agaydarova affirmed Odalat Sari Olg’a’s decision to remain independent. Uzbekistan’s newly adopted law on trade unions guarantees workers the right to join an organization of their own choosing and not to be compelled to join any organization. Under International Labour Organization (ILO) Convention 87, Freedom of Association and Protection of the Right to Organize, the decision about whether a union affiliates with a federation is the union’s own. Under Uzbekistan’s laws, a union must register as a public membership organization under the country’s burdensome rules for nongovernmental organizations. However, under Convention 87, which Uzbekistan has ratified, registration as a legal entity is not required and may not be used as a barrier for a union to organize or for an employer to recognize it.

Odalat Sari Olg’a is the first democratically elected union in Uzbekistan, marking a significant turning point in the fight to protect labor rights and eradicate forced labor in the country. “Protecting freedom of association and the right of workers to represent themselves will not only help eradicate forced labor in Uzbekistan but also prevent it from happening in the future,” said Allison Gill, Forced Labor Program Director at Global Labor Justice-International Labor Rights Forum, which hosts the Cotton Campaign. “Indorama Agro has an obligation to respect freedom of association and should recognize Odalat Sari Olg’a.”As Uzbekistan has worked to overcome a legacy of mass state-imposed forced labor with an ambitious reform agenda, it has also looked to open its cotton market to brands and investors. Together with brands and other local and international stakeholders, the

Cotton Campaign is developing a robust framework to monitor and remediate forced labor, empower workers and farmers, and encourage sourcing from Uzbekistan. At the core of this approach will be enforceable commitments to strong labor rights protections, including unhindered monitoring and grievance remediation, consistent with international standards and best practices.

“The establishment of an independent union is an important milestone in Uzbekistan and one that will help build the confidence of brands and retailers by showing tangible evidence of the necessary enabling environment for responsible sourcing,” said Nate Herman, Vice President for Policy at the American Apparel & Footwear Association. “Independent unions are a vital part of eliminating forced labor and establishing ethical supply chains,” said Julia Hughes, President of the US Fashion Industry Association.