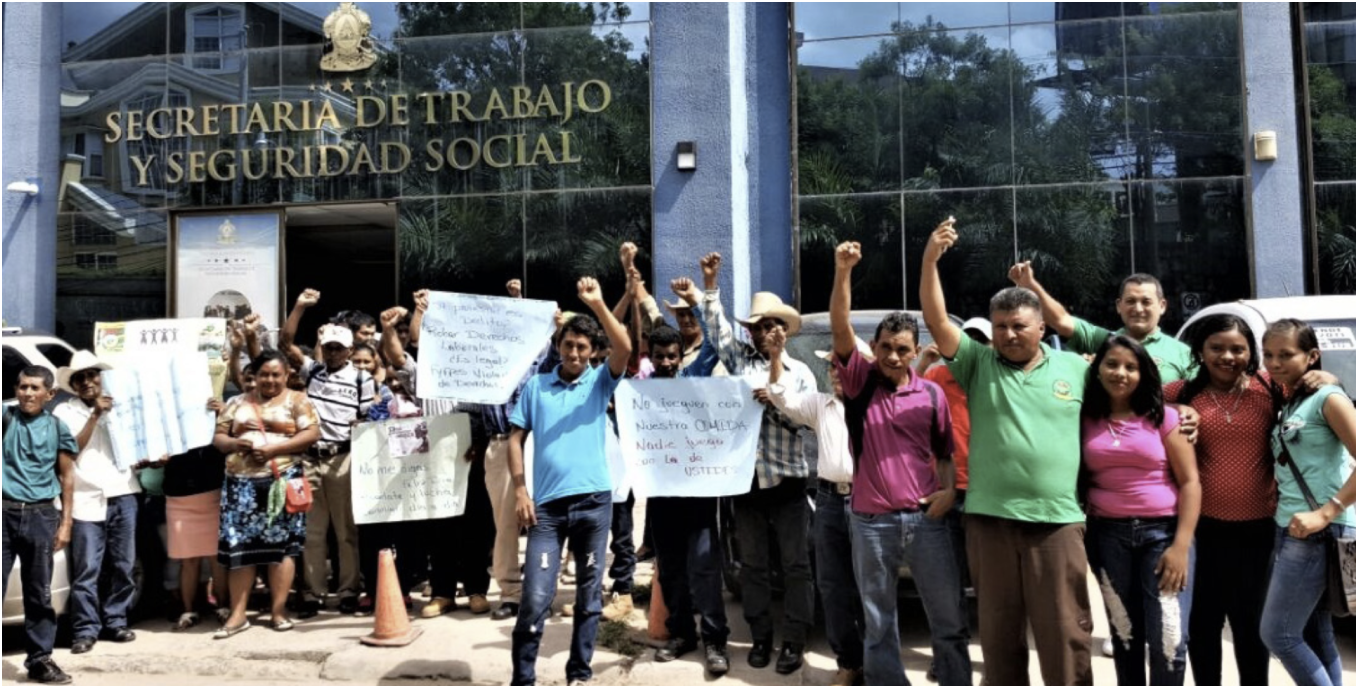 “The difference between staying in Honduras and leaving for the United States is not whether you have a job or not. It’s whether you have decent work,” states Tomás Membreño, President of STAS, the Honduran industrial agricultural workers’ union. He would know. In 2017, after palm oil conglomerate Grupo Jaremar used violence and unlawful firings to break STAS’s organizing efforts in the palm oil plantations, over a hundred would-be union members joined caravans headed north.

Central American migration to the United States today is sometimes framed as a humanitarian tragedy, sometimes a national security threat. Rarely, however, do we discuss the lack of decent work as a central reason for migration. Yet jobs that pay a living wage, offer fair conditions and benefits, respect fundamental rights, and give workers stability so that they can plan for their families’ future are fundamental to allow people from Honduras, Guatemala, and El Salvador to choose not to migrate. Decent work is also a fundamental feature of fair migration. It is the missing pillar of US policy in the region.

The relationship between work and immigration is complicated. Many who leave have jobs at home, just not good ones. Furthermore, economists have shown that more depart as opportunities begin to rise in their home countries, continuing until GDP reaches a certain level. Then migration drops and those outside begin to return. This is sometimes called the “migration hump.” Even while migration is rising, stable work at home with opportunities for advancement may encourage people to stay put. And in the longer term, a focus on good jobs is essential to reach the downward slope more quickly.

Meanwhile, for migrants, decent work is embodied in the idea of labor citizenship. All human beings, wherever they are from and whatever their immigration status, should have the right to be treated with dignity on the job and paid fairly for their labor. Labor citizenship is fundamental to ensuring that migration is compatible with decent work for migrants themselves and for local workers in the same labor market.

The Biden administration has committed to making its foreign policy coherent with domestic prosperity. Centering decent work in the US government’s efforts to address migration from Central America would align foreign policy and national security with immigration and internal economic goals.

How would this look in practice?

· The US government would support independent, democratic unions and grassroots workers’ movements in Central America and Mexico. Such institutions anchor civil society and protect the rights of marginalized people as they work to build decent jobs, advancing genuine democracy. In so doing, its foreign policy would be consistent with good immigration policy.

· The US would enforce labor provisions in its trade agreements in the region. Although the Central American Free Trade Agreement includes labor rights clauses, the US government has done little with them. STAS and other unions still suffer glaring violations of international labor standards. U.S. unions just filed the first complaint under the new US-Mexico-Canada Agreement, testing its potential strength. Using these tools to reverse downward pressure on wages and working conditions would put trade policy on a path consistent with good immigration policy.

· Where the US finances development projects in the region, it would strengthen and enforce conditions on loans regarding the quality of jobs created and respect for freedom of association among other labor rights — furthering sustainable development and sustainable immigration policy.

· The US would support efforts to build labor citizenship along the migration corridors on which Central Americans travel. One example is the Corridors of Justice initiative linking the workers’ center CIMITRA in El Salvador, ProDESC in Mexico, and the National Day Laborers Organizing Network in the United States, creating a network of workers centers across three countries in order to support migrants in defending their rights as they move.

· When the US admits Central Americans, it would do so with full labor rights. The administration would change course from plans announced in last week to bring more Central Americans in through guest worker programs that tie them to a single employer and make them deportable if they stand up for their rights. Instead, consistent with domestic prosperity goals and protections for US workers, migrants must come in with the ability to change jobs, and have help from the government, unions, and worker centers to make their rights real.

The long history of United States political intervention and economic extraction in Central America are key factors in the violence and corruption that are propelling people to leave today. A focus on decent work as a part of migration policy in the region is one way to address some of the damage from that legacy, to strengthen democracy and reduce inequality — and to lay the groundwork that will ultimately offer Central Americans a genuine choice to stay home.